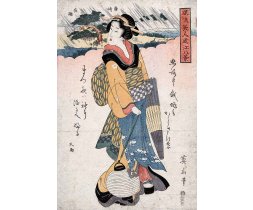 Kikukawa Eizan (1787-1867) was an ukiyo-e artist playing an active part especially in the Bunka era (1804-1818) after the death of Kitagawa Utamaro. While many ukiyo-e artists portrayed beautiful women in the sophisticated and ethereal Utamaro style, Eizan ushered in a new phase in the bijinga genre; although his women too wear the latest fashionable kimonos, he established his own sweet down-to-earth vision of female beauty. His works portrayed a diverse range of women from different social classes, such as the graceful young ladies of samurai families, charming daughters of merchants, or flamboyant courtesans. We see them sleek, svelte, and elegant, or sometimes bright, colorful, and fashionable. In recent years, Eizan’s bijinga are not well-known, but these works would have profoundly influenced not only his pupil Keisai Eisen, but also such later artists as Utagawa Kunisada and Utagawa Kuniyoshi. It is no exaggeration to say that bijinga in the 19th century started from Eizan.