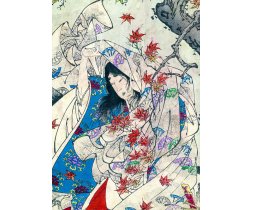 He is widely recognized as the last great master of the ukiyo-e genre of woodblock printing and painting. He is also regarded as one of the form’s greatest innovators. His career spanned two eras – the last years of Edo period Japan, and the first years of modern Japan following the Meiji Restoration. Like many Japanese, Yoshitoshi was interested in new things from the rest of the world, but over time he became increasingly concerned with the loss of many aspects of traditional Japanese culture, among them traditional woodblock printing.

By the end of his career, Yoshitoshi was in an almost single-handed struggle against time and technology. As he worked on in the old manner, Japan was adopting Western mass reproduction methods like photography and lithography. Nonetheless, in a Japan that was turning away from its own past, he almost singlehandedly managed to push the traditional Japanese woodblock print to a new level, before it effectively died with him.

His life is perhaps best summed up by John Stevenson:

Yoshitoshi’s courage, vision and force of character gave ukiyo-e another generation of life, and illuminated it with one last burst of glory.

— John Stevenson, Yoshitoshi’s One Hundred Aspects of the Moon, 1992